A Patch of Red Earth

Grass doesn’t grow under the big oak in our back yard.  It’s not like there was never any grass, but for the better part of the past couple of years it has been replaced by a big patch of earth, tinted red with clay.  Behind it is a netted goal, and behind that is an even bigger netted backstop to catch the errant shots and protect the neighbor’s yard, fence, and windows.  The backyard was taken over by a dream – to play a game, to get better, to be the best.  Nearly every day for three years the kid would be out there – bouncing off the rebounder, weaving at unseen defenders toward the goal, ripping a shot.  It didn’t matter if it was raining or hot or freezing or near dark.  Even during the season – before and after practice the backyard was transformed into a practice field.

Before he had the practice area, he’d taken to rebounding off the side of the house, the side that shares a wall with my office.  The amount of time he spent rebounding balls off the wall was inversely proportional to my productivity.  After he took out 3 porch slats with errant shots, we finally broke down and bought him a rebounder.  Sanity and job security were restored.  That purchase was quickly followed up by a practice goal.  And after balls landed with annoying regularity in a neighbor’s yard, we purchased the giant net backstop.  Our backyard had been successfully usurped.

After so much use the nets have hastily patched holes, shredded in spots from wear and tear.  The poles that support the backstop are tall and lean at odd angles, the net drooping between each pole; they’ve taken a beating.  The yard isn’t particularly level and the tree interferes with the left side of the otherwise adequate field of play.  We back up on the Mount Hill Commons and one day a big owl flew into a tree and watched Luc play for nearly 30 minutes.  It was like something out of a fairy tale.

I can see this home-spun practice area from my office and I’ve lost count of the number of times I’ve heard my son come in from school through the front door, and minutes later hear the back door slam.  It has become a daily ritual.  I’d turn around and see him jogging toward the net, gloves on, cradling a ball in the head of his lacrosse stick.  He runs to the net and winds up and lets a shot fly.  Sometimes a shot will ricochet off a pole and rebound with a large CLANG off the heat pump that is just behind my window startling me out of my chair.  Others might end up in the woods in the leaves, which is why I actually have a monthly budget for lacrosse balls.  It seems a small price to pay to help shepherd such devotion.

I’ve come to love this daily practice because I know it is all his doing.  I admire people who have such passion and faith.  But I love more the abandoning of oneself into play and how rare a commodity that becomes with the increasing pressure and responsibilities of adult life.  I look out my office window and see that patch of red earth I can imagine him running past a ghost army of defenders, toward it and the goal.  I envy that age when play is the most important thing in your life.

My favorite part is not the goal, the shredded net, or the leaning poles; it’s that patch of red earth.  Every time I look at it I marvel that a single kid did that over the course of a couple of years, trampling any hope of grass in the foreseeable future.  Many might think it’s a scar in a far-from ideal lawn.  But to me it’s a badge: of work, of effort, of hope and belief.  My son is a rising senior, and I know one day soon he’ll will be off to college, and then on his own.  The nets will eventually come down and grass will make its bid to reclaim that patch of red earth.  But for now, I like it just the way it is. 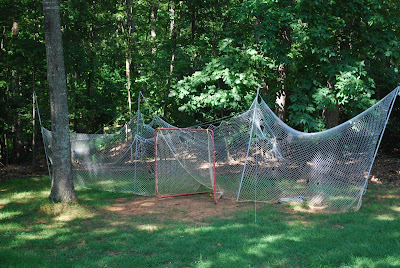